Hugh John Lofting was born in Maidenhead, Berkshire, England on 14 January 1886. He was the youngest son of John and Elizabeth, of Irish and English descent respectively. When he was very young, Hugh showed great imagination and love for animals, a fact attributed as the inspiration for his later writings. His creativity and ambition led him to travel to the United States at the age of eighteen to study civil engineering at Massachusetts Institute of Technology, which was regarded as one of the most prestigious colleges for such a career. After graduating from London Polytechnic he embarked in a search for a work that would allow him to fulfill his dream of traveling the world. His first job was as a surveyor in Canada in 1908. 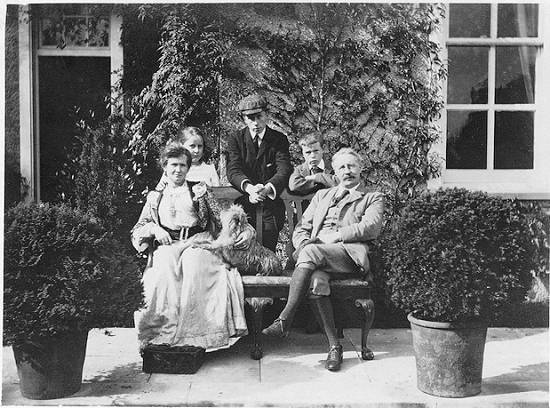 Over the next few years, he worked for two railway companies in faraway places like the West Indies, Africa, and Cuba, but he grew bored with engineering since the profession did not satisfy his creative side. He decided to start writing about his experiences and travels and settled in New York City to do so. Almost immediately, his short stories started to get published in various newspapers and magazines. He then met Flora Small in 1912 and married her the same year. His family grew rapidly, and by 1915 he already had two small children: Elizabeth, named after his mother, and Colin. He was content writing his stories when World War I broke up in Europe. Since he was a British subject, he started working in the New York City offices of England’s Ministry of Information. Later, he went abroad to Flanders and France to serve in the Irish Guards. 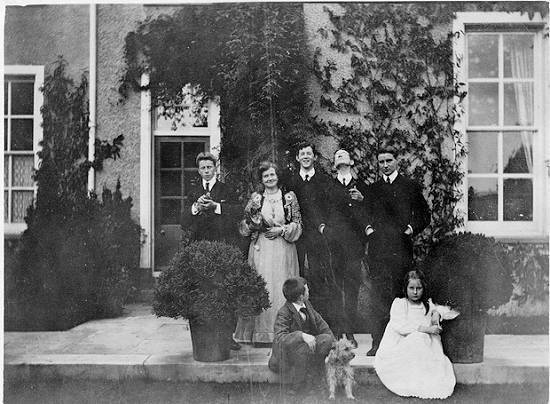 The Lofting Family. Hugh is on the left. Some speculate that he is holding a small animal on his hands.

When he was very young,

imagination and love for animals,

a fact attributed as the inspiration

for his later writings.

The experience of war left a huge mark on Lofting since he was a first-hand witness of the horrific nature of man killing man and the pain and suffering of war-horses, who were abused and overworked in miserable conditions until their inevitable deaths. He specifically noticed how wounded animals were left to die. Although there were facilities for wounded soldiers to receive treatment, there were none for the animals used to carry on with the war efforts. From his outraged about the unjust treatment of animals, Dr. Dolittle was born. 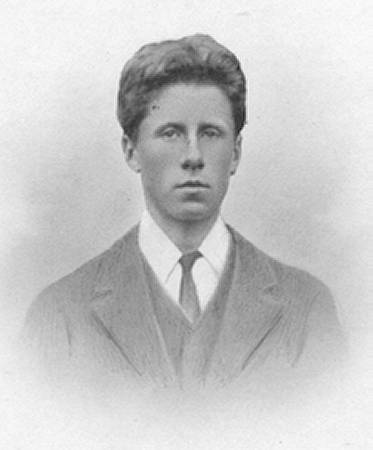 Young Hugh Lofting before going on his travels and later World War I.

He wrote about him, for the first time, to his children back home. He wrote letters in the trenches to his family, and since he did not want to share war atrocities, he wrote about a doctor who no longer attended humans, only animals. To better understand what ail his animal patients, he learned their languages. In other words, he talked to them and the animals talked to him. His children loved the stories and eventually, children around the world loved them too with the publication of his book titled The Story of Dr. Dolittle in 1920. For the rest of his life, he was a firm opponent of war and a defender of animals against cruelty. 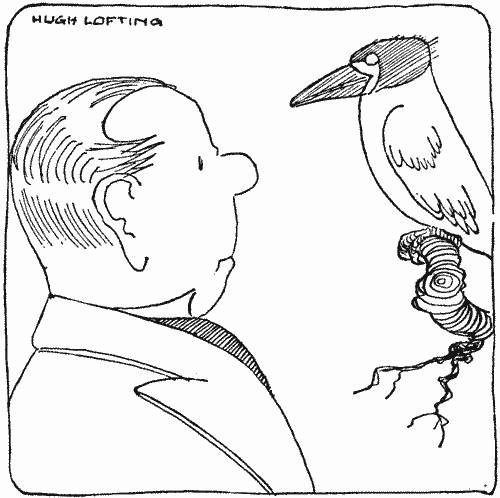 For the first edition of Doctor Dolittle, the author drew all the illustrations. 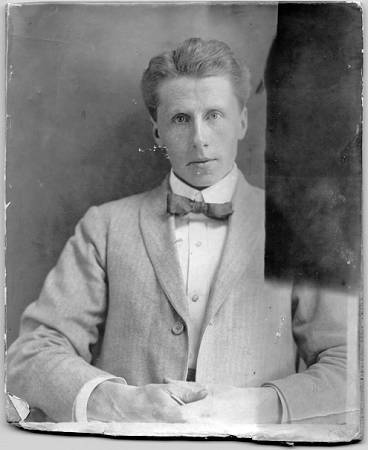 After he suffered shrapnel wounds in 1917, he returned to the United States and started writing full-time from then on. Soon after the success in England and America of his first Dr. Dolittle, he wrote The Voyages of Doctor Dolittle, were the doctor and his animals go on high-seas adventures. The book earned the American Library Association's Newbery medal the year it was published (1923). He followed it with stories of the doctor in different settings like Dr. Dolittle's Post Office (1923), Dr. Dolittle's Circus (1924), Dr. Dolittle's Zoo (1925), Dr. Dolittle's Caravan (1926), and Dr. Dolittle's Garden (1927). 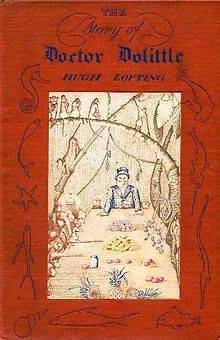 1920's First Edition of The Story of Doctor Dolittle

Sadly, in 1927 he lost his wife, Flora. A year later he married Katherine Harrower, but she also died within a few months of their wedding when she contracted influenza. He was not the same after that. He did not write with the same intensity and passion. He even tried to retire the doctor’s stories but his fans claimed for more, so he wrote Doctor Dolittle’s Return to oblige them. It is considered by critics as his last quality writing.

He saw his two first young wives died without giving birth to any children. Their deaths clouded his writing and he never wrote happy-go-lucky stories again. 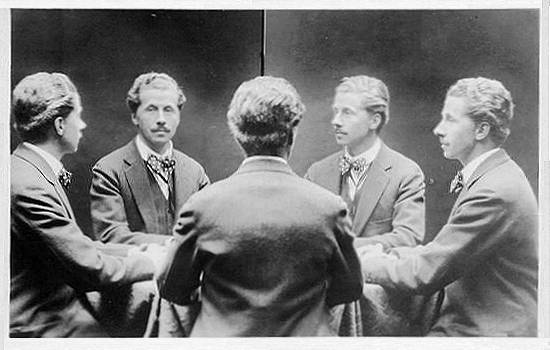 Hugh Lofting in a strange photo, where his reflection appears five times. The effect probably was achieved using multiple mirrors.

In 1935 he married again and had a son, Christopher for whom he wrote the last Doctor Dolittle story, Doctor Dolittle and the Secret Lake. He wrote other books not based on Dr. Dolittle. Amongst these are: The Story of Mrs. Tubbs, Gub Gub's Book, Porridge Poetry. But any of his other writings gained much recognition. His writing had changed, it was dusted with moralizing and pessimistic tones, death, and destruction, probably induced by the outbreak of World War II. The outcome of another war dispirited him since living together in harmony was one of his central themes. His health declined. Two years after the end of the war, in 1947, Lofting died in California at the age of 61 from a long illness. 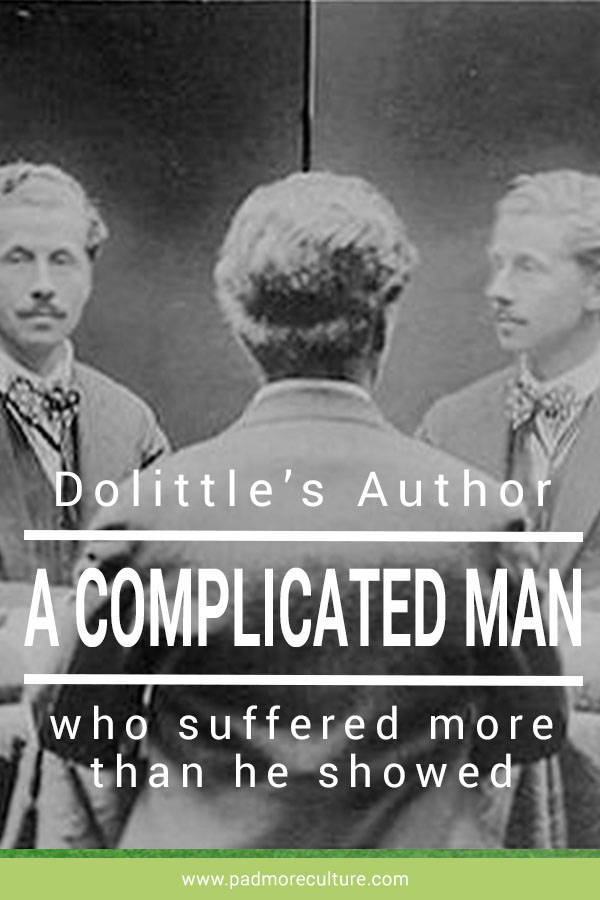